Miscellaneous photos of Stone Soup Symphony over the years.


Here are some samples of the Stone Soup Symphony from various performances. Outdoor Overture - 2010
Lord of the Dance
Light Cavalry Overture

Thanks to Dave Kelber and WRNJ radio for the interview on Dec. 16th.
Also, here is a radio interview done by the BBC on 12/4 about our member Peter Hand's carol "Christmas Comes But Once A Year" and performances here and in England.

Many thanks to everyone who came out to our holiday concerts on Dec. 18th and 19th 2010! Both shows were big successes and great ways to get into the holiday spirit.
The concert on the 18th at the First Presbyterian church was a great show and very well received.

Thanks to Chris Lance for organizing the St. Mark's Invitational on Dec. 19th. We played with some great local choirs for some really special music.
Here's video excerpts of the show, gracefully donated by Mayer Dubinsky

Many thanks to those who came caroling with us on Saturday 12/4/2010. We had a great time! I got a lot of great feedback that we really did brighten the lives of the residents at House of Good Shepherd, Heath Village, and those admitted to Hackettstown Hospital. We received a lovely thank you letter from Hackettstown Hospital.

The Frankin Band memorial concert for Clint Miller was an inspirational event. DVDs will be available soon.

On 10/2/2010 we participated in the Hackettstown Community Day.
Thanks to all who stopped by to visit our booth and say hello!

Our 2nd annual Holiday concert on 12/13/2009 went well and was enjoyed by a wonderful audience. The orchestra played, the audience sang, we all ate. A lovely evening all around.

Victorian Days in Belvidere, NJ was beautiful weather and a great show. Sunday Sept. 13th, 2009. The large crowd was appreciative and full of funnel cake. We can't wait until next year.

We had a wonderful time playing for the folks at Heath Village on Wednesday August 12, 2009. We look forward to returning.

Many thanks to all who made our May 31 Schumann concert at St. Marks church a big success!

Victorian Days, Saturday Sept. 6th, 2008 - Belvidere, NJ
Rained out for the most part. We performed inside the church on the square for the few brave souls who came out in the storm. Let's hope for better weather next time.
Program: Destino, Southern Roses Waltz, Liberty Bell March, Pan-Americana, Persian March, Jamaican Rumba, Morning Journals


Our member Louisa Oualim put together this artwork for us. Thanks Louisa! 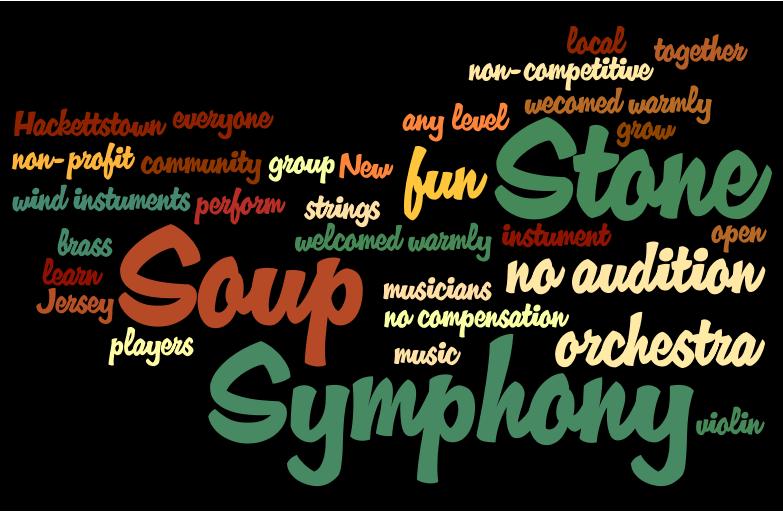